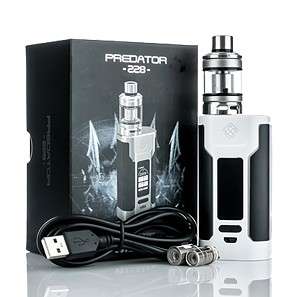 We aren’t exaggerating when we say that the Wismec Predator Starter Kit could be the product that shakes things up in the industry for a long time. This incredible new device from Wismec one-ups many of the latest high-powered devices by including many innovative features that other manufacturers have left out altogether.

Let’s get into the nitty gritty and see what Wismec has in store:

get my wismec predator starter kit

To begin with, the Wismec Predator 228W Vape MOD Starter Kit is a direct answer to Smok’s Alien super-powered device. At 228 watts and 50 amps, it shows Wismec is looking for ways to push the envelope, even for marginal gains.

The device itself is slim and comfortable in the hand, with a large screen set into the side. You’ll notice immediately that the smooth front face appears to be missing a critical component: the firing button!

Stepping in a new direction, away from the chunky firing buttons and long firing bars that other manufacturers have used, Wismec has created an invisible button instead. You will find the button by feel, rather than visual cues, which is an interesting if unintentional, way of keeping children from getting curious and pressing buttons.

By this point you should be asking how a device like this is capable of pumping out 228 watts. It uses the same two-18650-battery setup as many other devices. However, it also has several other important features that provide it with extra chutzpah.

First, despite the fact that the batteries are not included and are interchangeable, it retains a USB charging port. This makes it simple to charge your device at the office or in the car, even when you don’t have a standalone battery charger on hand.

Second, you can purchase a separate cord called the Avatar Quick Charger. This unique cord uses the same USB port to provide you with a 2-amp boosted charge that will bring your device up to full charge in half the time. This is a highly recommended accessory for those who rely on their vaporizer day in and day out.

What else could Wismec have possibly packed into this little mod, you ask? Reverse charging. That’s right. They took their engineering genius one step further by allowing you to charge your phone, iPad or other mobile devices off of your vaporizer. It’s like you have a portable battery pack in your pocket at all times that can be quick charged with the Avatar cord and sent back into service.

Other companies have flappy bird games. Wismec has reverse charging. This is one of those features you didn’t realize you needed until it’s here, and now it could become a staple.

When you purchase your Wismec Predator, you will find that it comes with an incredible sub-ohm tank called the Elabo. This accessory is built with a 4.6-milliter capacity or an optional 4.9-milliliter upgrade. Again, that’s a straight challenge to other manufacturers packaging their 200W-plus machines with paltry 3-milliliter capacities.

The Elabo has bottom airflow controls using a simple ring-style design that you can rotate to adjust. It also includes an innovative retractable child-proof topm which makes it fast and easy to refill while ensuring that kids can’t accidentally get into the tank without serious effort.

Aside from all of the great features already measured, the Wismec also does its part by offering both temperature-control and variable-wattage modes. You can easily swap between two different coil heads that provide you with a different taste and feel.

Wismec built the Predator in five great colors, including a brilliant champagne color that stands out from the standard blacks and silvers.

When you pair all of these features with the incredible $72.95 price, it’s easy to see how the Wismec can outperform nearly every one of its competitors. This new combination of technologies is sure to send some of the more established companies searching for a way to step up their game.

Wismec has not yet released a shipping date for the product, but you can pre-order today. This product is already in high demand, as early adopters clamber to get their hands on this device and test out some of its unique features.

Given Wismec’s history of great releases, you can expect the Predator to perform well straight out of the box, but Wismec has also assured us that they will be providing firmware updates via the USB port once things are rolling.

Get my eleaf ikonn 220w kit

Post-Launch Critique of the Wismec Predator

Now that the Wismec Predator has been out for a few months, we at DIRECTVAPOR just wanted to come back and give some updates on our original Wismec Predator review. We’ve had it in our hands long enough to test it out, get familiar with all of the features and learn its limitations, so now is the perfect time to tell you all of our impressions.

Ultimately, the Predator 228 lived up to its potential and offered some real improvements over other large box mods in this range. Wismec did a great job of focusing on the finer details of the design. For instance, when you turn the box upside down to put your batteries in you will notice that there is a tiny flange that extends past the base of the battery compartment. This makes the device more stable when standing upright because it isn’t resting on the door.

Similarly, on the top of the device you’ll notice a small juice well indention around the connector. This particular safety feature is often under-appreciated now that tanks have become fairly leak proof, but it is nice to have just in case. It’s also worth mentioning that while the Elabo tank is a 25-millimeter tank, this device really can handle up to a 28ml tank. That’s pretty huge for those who have invested in some of those hardcore tanks.

This is also a good time to talk a little bit more about the screen and its features. The stacked display has become a big trend for vapor manufacturers lately because it makes it so much easier to read information without having to click through menus. With the Predator 228, you’re definitely getting the best out of the OLED screen as you can read it without having to tip your device one way or the other. It’s super legible so you won’t have to squint or cover your eyes to see it in the sun.

As far as functionality goes, the Predator really proved how great Wismec can be. For this portion of the Wismec Predator starter kit review, we’re talking not just about the device, but also about the fantastic Elabo tank that came with it.

From the moment we took this thing out of the box we fell in love with features like the preheat function. Setting your vape to preheat your coils before you take a hit ensures that you are actually reaching your goal temperature every time. It primes your coils for firing, giving you stronger vapor overall.

With the help of the Elabo tank we’ve been able to enjoy the full potential of the Predator 228 with ease. We found that the handy slide top makes it super easy to refill your tank with the full 4.6 milliliters of juice. The stainless steel over the Delrin mouthpiece is a great option, and it is held very tightly in the tank by the extended chimney.

The airflow slots near the bottom are large enough that you have tons of range for making adjustments. With the side-by-side, slotted configuration it is easy to find the perfect airflow for you, where as other designs with tiny port holes are often too finicky to nail down.

The only real question we had about the Elabo is why they didn’t thread the coils that come with the starter kit. We didn’t have any connectivity issues per se, but it is unusual to just set a coil in the hole without securing it to the connector. Nevertheless, the whole system performed above expectations across the board.

Wismec has been quick to issue firmware updates for the Predator already. Their latest update helped improve the accuracy of the temperature control and battery systems all around. Now you can see the discharge rates of your two batteries separately, which is an important feature if you want to maintain healthy batteries long-term. It is nice to see that Wismec is already thinking about the future of this device and actively improving it immediately after release instead of waiting to make small fixes.

We are happy to say that the Wismec Predator 228 has earned gold star status from us at DIRECTVAPOR. Not only does it do exactly what it’s supposed to do, there are plenty of little things that make this device a cut above the rest. The attention to detail that comes through in this device puts it up there with some of the finer “luxury” model devices on the market. Wismec definitely did their homework when it came to building a high-capacity device, and their selection of the Elabo tank to pair with it is about as good as it gets. At this price point, it’s hard to imagine you could ever beat the Predator.

If you have already tried every other 200W-plus vaporizer on the market and you’re yearning for something completely different, the Wismec is where it’s at. Sure, you’ll have to wait a little bit before the box arrives, but if you don’t order soon there’s a good chance this device is going to sell out in the first several weeks and you’ll have trouble tracking it down. When you buy through DIRECTVAPOR, you buy with our low price guarantee.

Here’s the Skinny on Skins and Sleeves for Your Mod

What is the Most Expensive Vape Mod?