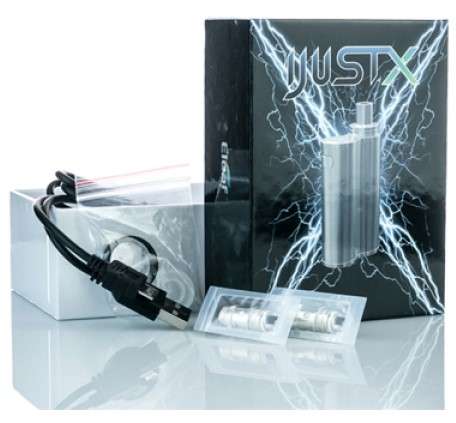 The incredibly sleek Eleaf iJust X was released on March 13, marking the beginning of a new era in vaporizers from the Eleaf brand. This smooth device is unusual among advanced vaporizers for its huge capacity and its focus on creating amazing vapor quality without any compromises. This is a simpler way of getting the ultimate vapor experience every time.

Right off the bat you’ll notice that there’s something unusual about the iJust X. As an advanced vaporizer, it is striking that there is no LED screen eating up the real estate on the side of the box. Where could it have gone? Eleaf decided that instead of trying to create a vaporizer that can do all kinds of tricks, they were going to build a device that does one thing exceptionally well: produce vapor.

To achieve this goal, they decided that 50 watts is all it takes. So the iJust X is pre-set to 50W, but that’s not a bad thing. In fact, it’s kind of like driving a racecar. A racecar is designed to win a race, not go off-roading or tow a trailer. It just needs to do one thing well and it is precisely tuned for that task. The iJust X is precisely tuned to produce massive amounts of vapor at 50W every time you turn it on.

What Do You Gain Instead?

Naturally, giving up the screen is just a tradeoff for what you actually get packed into this device. The iJust X comes with an incredible 3000mAh battery built in. A mini USB charging port is situated near the top for easy access. This battery has dual circuit protection and resides inside of a completely sealed battery cavity that is never subject to leaks or damage from e-liquid. The dual-canister design of the body contours to the shape of the batteries.

In addition to the awesome battery life, this device also comes with a 7-milliliter tank built in. It would be a significant capacity in an external tank, but this built-in design is a dream. A top refill port makes it easy to load this box up and snap it closed. It is also incredibly durable so you don’t have to spend any more time worrying about broken glass.

If you’re still concerned about whether or not 50W is really enough, don’t be. For most vapers, 50W is more than enough for day-to-day vaping. It may not be optimal for cloud-chasing performances, but it is a workhorse device designed to plug away day after day with impeccable consistency. It produces full, dense clouds that are comfortable for relaxed casual vaping.

It does a good job of drawing out the flavors in your liquids and getting the nicotine to you in a strong punch. Instead of adjusting the wattage and temperature, you will rely on adjustments to your atomizers and coils to get the job done. You can go from 0.1 to 3.5 ohms of resistance just with your accessories alone.

You will notice a tiny LED bar light on the front face of the device. It has a light that indicates battery life. When the light is on, the battery is fully charged. The light will flash faster as the battery drains.

What Makes the iJust X Great

Maybe it isn’t for everybody, but there are some aspects of this device that are truly amazing. First of all, this is an amazing entry-level device. No setup and no complicated menus or options to learn. Yet it manages to pack a massive battery and liquid tank that so many other starter devices leave out. The capacity alone makes this a highly desirable part of any collection.

Second, the price of this device is very competitive. At around $42, vapers can get a solid vaping experience without spending a fortune on the box and extra accessories.

Finally, it really does deliver on its 50W promise. It proves that 50W is a reasonable amount of power for most anyone to use on a daily basis, and without all of the extra electronics and screens it can maintain that 50W more consistently.

Overall, the Eleaf iJust X is a noteworthy device for vapers and vapor companies alike. It is definitely a step up from a vape pen – and even some of the smaller box mods. It serves a niche of people who want more power but don’t want to deal with complex TC mods and endless adjustments.

With the added battery and tank capacity, you really can’t go wrong. You could vape for days on a single charge and single refill of e-liquid. Perhaps this is a sign that more manufacturers will be offering ultra high capacity streamlined devices in the near future!

Vaping in the Sun: Precautions to take Every Summer

How to Update Firmware in your MOD