Skip to content
Check Out This Week’s Deals! Shop Now 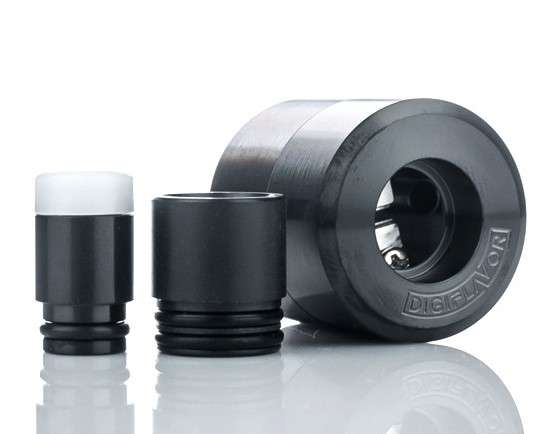 The Digiflavor Lynx was recently released from the new accessory mastermind that was born out of the more established GeekVape brand. As a creator of dependable RDAs and RTAs, the Digiflavor Lynx showcases what Digiflavor is capable of right out of the gate with an elegant design that is a pleasure to use.

The Lynx has a wide-body 25-millimeter diameter. It is among the largest RDAs on the market today, but the result is a wider build deck that is very easy to work with. In addition, the Lynx is 26 millimeters tall, making plenty of room for the awesome two-millimeter deep well.

On its own, this RDA actually holds more liquid than some current vape pens, which is pretty amazing. Of course, this requires a leak-proof design to keep things clean, and Digiflavor delivered on that promise as well.

As mentioned above, the diameter of the Lynx lends itself to a very large working area on the build deck. Digiflavor decided to do away with the status quo and created a whole new system of spring-loaded clamps to hold your coils instead of the traditional screw design.

At first you might think that the clamps would make it easy for your coils to slide off the sides of the deck, but that is not the case at all. Two little notches in the end of the clamps hold the wire in place as you tighten the clamp down to prevent shifting. This is a really convenient design that saves you from ever having to worry about lost screws or inadvertently damaging tiny components.

Now is also a good time to point out that each clamp is responsible for holding two wires. At first this takes some getting used to because you will be loading both coils at the same time, instead of one at a time. Start on one end, get both coils lined up, then tighten the screw down, then move to the other end. Once you get used to it, it’s easy to do, but the first time or two it may seem like your coils aren’t quite lined up.

One of the most challenging parts of building a great RDA is mastering airflow. The Digiflavor Lynx features both bottom and side airflow ports. This particular design allows you to use one or the other, or both at the same time. Some other manufacturers have had trouble accomplishing this by having one set of ports always open. That is not the case with the Lynx.

The top cap of your RDA is used to control your airflow. You can slide it up or down gently to reveal the bottom airflow ports. Take note that these are very narrow, slotted airflow ports, so it may take some fiddling to get your settings just right. It doesn’t take much to completely close or open these ports. If you want to partially open them, you’ll have to be diligent.

The side airflow ports near the top are a little bit easier to work with. Instead of using a sliding motion to adjust, you can actually screw the top section on. It is threaded so it has a more measured movement that makes small scale adjustments possible. Fortunately, once you’ve found your sweet spot for vaping, there isn’t much need to fiddle with the airflow adjustments any more.

When it comes to actually vaping, the Digiflavor Lynx does perform very well. The wide bore Delrin drip tip makes for a cool vape that doesn’t burn the lips. The large well and the bottom airflow ports make it possible to go an extended period with really strong flavor and no dry hits. If you choose to add the side airflow ports, you will get a better mouth-to-lung experience. It is a great addition to any cloud chaser’s collection as it is capable of building really robust clouds.

This is Digiflavor’s first attempt at creating a high-end RDA. They did a lot right, and they definitely added some fresh ideas to the design. The Lynx provides a solid baseline for what Digiflavor is capable of. In the future we will likely see further improvements upon the airflow and clamp systems. Some people would like to see a clamp system that puts the coils closer to center, rather than the current offset design. It doesn’t seem to impede performance in any way, but for those who are used to building perfectly symmetrical setups, the offset nature of the Lynx can be nerve-racking.

Overall, Digiflavor didn’t skimp on materials or machining. The whole RDA is sturdy and clean. It fits together tightly and doesn’t have any leaks or rattling on the inside. With room for up to two milliliters of liquid, it really stands out as a heavy-duty RDA. Buy it from DIRECTVAPOR and you can be sure you are getting a genuine product with our no clone zone guarantee.

PrevPreviousWhen Did Vaping Become a Thing?
NextHow Often Should You Replace Your Vape Wick?Next

How Do Atomizers Work

When Should You Replace Your Vape Tank?

How to Fill Your Vape Tank with Juice

Why is My Vape Tank Leaking?