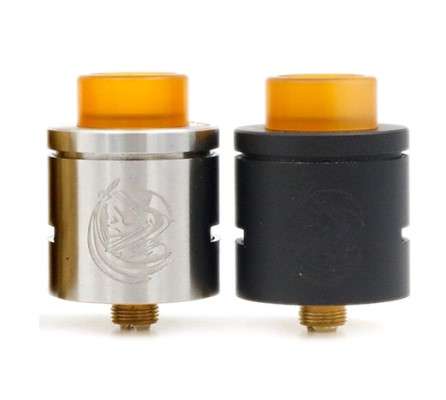 The Cosmonaut RDA is an impressive new drip atomizer from District F5ve. This unusual little accessory is taking on some of the conventional wisdom of the RDA market by adding new features that change the way you experience drip vaping. Let’s break it down so you can see why you need the Cosmonaut in your vapor arsenal.

First and foremost, District F5ve set out to solve one of the most chronic problems experienced by drip vapers: heat. Due to the relatively short path between the coils and your open mouthpiece, many RDAs are known for getting exceptionally hot on the lips. The more power you push through it, the worse it gets.

The Cosmonaut was District F5ve’s answer to this. They decided that they would build a short, stocky little RDA that is a master of dissipating heat so you no longer burn your lips on the mouthpiece when you turn up the power. Needless to say, they really delivered on it.

Unlike other RDAs, you will notice that the top cap of your Cosmonaut does not sit all the way down in the body. Instead, it features a tiered outer ridge that allows heat to dissipate from the sides of the body before it ever reaches your mouth. Those tiny ridges increase the amount of surface area beneath the top cap for heat to transfer through.

After numerous tests, it was apparent that we simply couldn’t defeat this system. The hottest builds we had were no match for this masterful design.

So now that you know the biggest draw to this particular RDA we can look at some of the other features. First of all, it comes in a clean matte finish with the Cosmonaut logo etched in the front. It looks great on just about any device, but you can also get it in stainless steel if you prefer.

It looks very short compared to some of the other large well drip atomizers out there right now. This is because it actually has a very shallow well. The deck itself is ultra wide and comes with large flat head screws and a solid building block for anchoring your coils.

The entire deck is plated in 24-karat gold, making it super effective at transporting power. Plus, it just looks great when you unwrap that shiny bottom deck for the very first time.

Instead of having a large well to drip into, you simply tuck your cotton along the bottom edge and you can wick enough liquid to give you a good solid vape.

The sides have giant airflow ports, and you can choose from either a single coil configuration or dual coils. Perhaps the hardest part is making sure that you put the top back on straight after you’re done dripping so that the air flow ports line up properly with your coils and give you the best airflow.

Aside from that, it comes with a great mouthpiece, but it is also compatible with a wide range of wide bore tips if that’s what you prefer.

As we mentioned above, there was a lot of effort put into testing this thing to see if the heat would ever make its way up to the mouthpiece. It never did get hot. Instead it produced huge amounts of vapor, which was impressive on its own, and it actually creates kind of an unusual and unexpected change in the way you take that vapor in. Since the vapor is hotter than the mouthpiece it has a really nice warming effect as you draw in.

Building on this thing is incredibly easy thanks to the wide body of the deck and the large ports for the coils. There wasn’t a lot of difficult with tightening down screws or having coils too close together. You can really get creative with this one by adding as many coils as you want as long as you keep them from sticking up too high.

As far as value goes, the Cosmonaut RDA is a great buy. In fact, at $65 it is a real bargain compared to some of the more expensive RDAs that do not perform as well. The unique features that give this RDA so much body should be a lesson to other manufacturers about creating a device that’s comfortable to use.

If you’ve been searching for a powerful new RDA, the Cosmonaut should definitely be on your list. You will have to get used to building on this one since you have a less pronounced well and an open ridge at the top, but it will be totally worth the trouble. Just be careful not to drip too much liquid on the deck as you only have one O-ring keeping you from a sticky situation.

Once you’ve learned how it fits together you’ll find that this RDA is everything you’ve ever needed!

What is an RDA? Benefits & Uses of RDAs

How to Stop Your Vape Tank from Leaking

A Beginners Guide to Drip Vaping The Right Way

How Often Should You Replace Your Vape Tank