Every once in a while, a device comes around that really changes the way we think of vapor technology. For a long time, manufacturers have been driving toward a more sophisticated, practical aesthetic for their devices. The Asvape Michael mod does exactly the opposite. This device was designed for the outrageous ones – the people who crave outlandish design, bright colors and weird art.

This one is for the odd ducks that just want something different for its own sake. Let’s take a look: 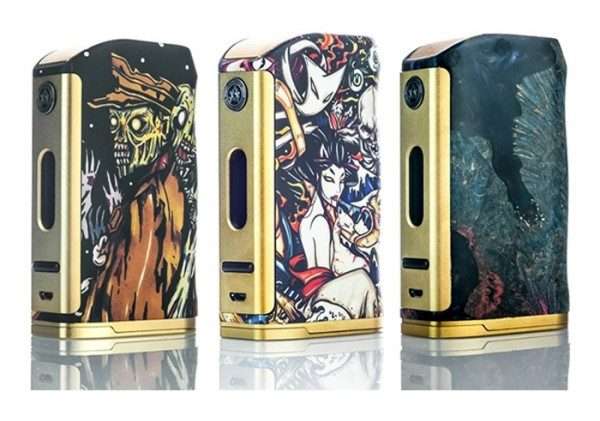 When you first pick up the box of the Asvape Michael you’ll notice that it is in a neat package that clearly depicts the device inside. You can choose from three different color/style options so far, but Asvape has promised more to come. The artwork on the outside of the device is reminiscent of modern graphic novels. If you’re a fan of zombies, vampires, and other devilish figures, the artwork will be right up your alley.

However, they also created a new executive option that comes with stabilized wood, a gorgeous colored wood paneling that stands out even among other luxury vape mods. The whole thing is trimmed with a pretty gold frame that ties the look together.

If there’s one thing we’ve learned from previous mod designs with exotic finishes, Asvape had to go above and beyond to ensure that the colorful artwork would not rub off or scratch while being carried around. They made this possible with the help of a rubberized coating that seals in the image and keeps it safe from scratches and dings. (Incidentally, the rubberized finish also gives it quite a comfortable grip in your hand.)

While the artwork is definitely the most attention-grabbing part of this mod straight out of the box, it isn’t the only great feature. The front face includes a 0.91-inch OLED screen that fits snugly between the round firing button and the adjustment button at the bottom. This screen size has become pretty standard in the industry as a whole.

Starting Up the Asvape Michael MOD

This device has more to offer than meets the eye. Tucked inside is the VO200 chipset, which has been praised for its efficiency and accuracy. VO Tech has disrupted the long line of YiHi and DNA chipsets in the vapor industry by offering greater consistency in power and delivery. 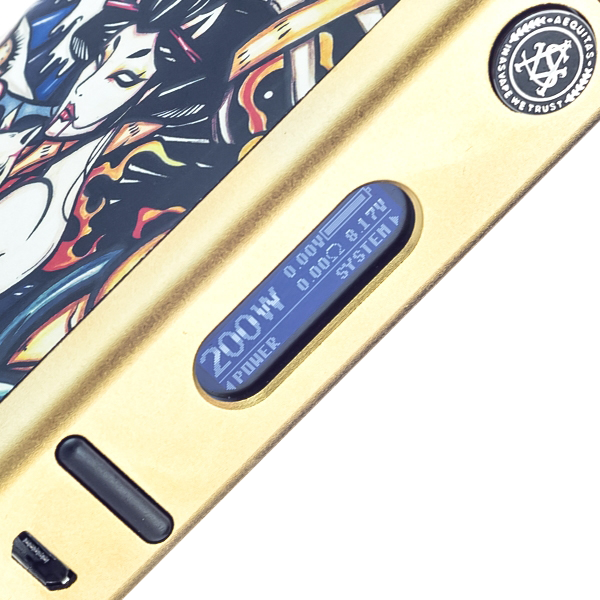 In addition, those who have spent some time with the VO boards have found that they are better constructed and can stand up to being bounced around in your pocket better than other chipsets. This level of dependability may come at a cost, as the Asvape Michael is a bit more expensive than other 200-watt devices on the market today, but those who spend the money swear by it.You’ll find that the Michael 200W mod starts up quickly and is capable of maintaining high-wattage output for extended periods of time. Fluctuations in power are minimal. For most people, vaping at 200W full-time is a little bit overboard, but at around 75W this device is well within its prime operating zone and works flawlessly.

The chipset offers ultimate control when setting up your temperature controls and gives you five memory save slots, more than any other device currently available. This is good news if you were constantly having to oust one of your three memory slots on older devices.

The TC mode is easy to operate and makes the experience of vaping e-juice highly personal to the user. For those who typically burn out on TC mods pretty quickly, this may just change your mind with its smooth operation.

Of course, the VO200 also comes with tons of safety features in place to keep your device in tiptop condition. This includes all of the standard short circuit protections and over-heat protections, but also includes a new anti-dry hit technology that will keep you from ever experiencing that nasty burnt flavor.

If nothing else, Asvape has proven that they can be a serious player in a game full of big dogs. At first you might think that they are relying too heavily on the visual aspects of their device to get by, but once you pick up the Michael and try it for yourself, you’ll see that they went above and beyond on the things that matter most.

By choosing a non-conventional chipset and pushing it to its limits, they were able to deliver an experience that few other devices have come close to.

This Asvape Michael VO200 TC review should give you a good idea of what to expect when you pick this product up. We had few complaints about this device and were very impressed with how well developed it is given Asvape’s previous anonymity.

If they were looking to blow our minds, they did a fantastic job.